This week, on Wednesday, a scientific tweetstorm started about a publication from Zachary W. Culumber et al., who published a paper without removing a draft comment that was not supposed to get public. The full story is nicely summarized by Grrlscientist.

Despite the fact that many of the commenters address the apparent lack of proper peer-reviewing before the manuscript was published, I had another thought. What if…?

Typically, a manuscript is reviewed thoroughly by the authors themselves before it gets submitted. Then, in the following peer-review process, at least two anonymous experts are reviewing the text and offering comments, including their suggestion if this manuscript should be either accepted or rejected for publication. It is unlikely, but of course not impossible, that such a blatant mistake got overlooked. And, the peer-reviewers are not paid and doing that work besides their actual one (like teaching classes, supervising research, or applying for funding). But what if… this was done on purpose? 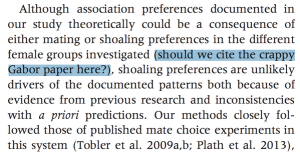 My theory is that the reviewers, or at least one of them, might be a competitor of the authors. It might have happened that this mistake was noticed and not commented. In that case, the anonymous peer-review process would offer a perfidious way to harm competitors – simply by letting them run into the open knife.

However, in each case the peer review had clearly failed. It’s only human and besides a gleefully smiling community, the scientific results were never called into question.